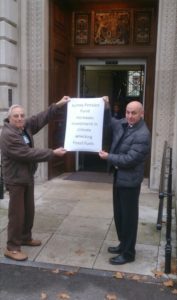 Campaigners who have been urging Surrey County Council’s Pension Fund managers to take investments out of fossil fuels staged a peaceful protest at their regular meeting this week (Friday 16 November 16), causing the meeting to be temporarily adjourned.

Steve McDonald, of Divest Surrey, said: “I’m sick and tired of the Pension Fund Committee ignoring the urgent need to move away from dirty and polluting investments. We’ve been politely attending the committee and asking questions they fail to answer for two years and we now feel stronger action is needed.”

Surrey Pension Fund has £145 million directly invested in the fossil fuel industry. Across the UK, councils are investing more than £16bn of workers’ pensions in fossil fuel companies. However, the divestment movement is growing and 13 councils have now divested from fossil fuels.

Green Surrey Councillor Jonathan Essex, who has written to the Pension Fund Committee Chair, Cllr Tim Evans, said: “Surrey Pension Fund has moved some of its funds into low carbon technologies. But it has actually increased the money it has in fossil fuel extraction. We’re running out of time. These fossil fuel investments are both tainted and high risk.”

Divest Surrey campaigners attended the meeting at County Hall in Kingston and asked questions including when the Pension Fund Committee would move money away from fossil fuels. They challenged the Committee on its policy of engaging with fossil fuel companies to encourage them to reduce their production of carbon-based fuels, rather than just divesting money away from them.

When they failed to get any justification for this, or commitment to divesting, the campaigners refused to leave the meeting. The meeting was then temporarily adjourned and an emotional exchange of views took place. Having made their point, the campaigners left peacefully of their own accord.

Steve McDonald said: “The recent IPCC report from scientists around the globe said we have just twelve years left to stop climate catastrophe. I’m not prepared to sit around and wait for pension fund managers to do something about it – it’s vitally urgent that action is taken right now.”