The works permitted by Surrey County Council in Sept 2019 – including four new oil wells and 20 years of production – cannot proceed without this Environment Agency permit.

We urge everyone to object. click ‘Online Consultation’ here – Link
The consultation closes this Thursday, 31 March 2022.

Please take 10 minutes to read through the following and respond to the EA on one or more of these points.

Gas flaring (burning)
HHDL has done a major U-turn on their promise not to flare the gas that comes up with the oil. They told residents – and Surrey County Council – that they were not going to simply burn off the gas but use it to generate electricity. Instead, the proposed permit would allow them to flare – and therefore waste – up to ten tonnes of gas a day.

In reality the amount of gas they produce may well be less than this in the short term and HHDL claim it is too little to currently justify the expense of installing equipment to generate electricity. They say that not installing this equipment saves them £759,527.30. The EA agrees, saying flaring is the ‘Best Available Technique’ (BAT) at present.

Please insist that the money HHDL can save is not worth the impact on our environment. Wasting any gas which could be used to heat our homes or to generate electricity, particularly now that we face an energy crisis, is simply unacceptable.

Earthquakes
There are serious concerns about the failure of the regulatory process to properly assess the risk of earthquakes, and the environment and the public are being put at risk. Issues surrounding seismicity appear to fall between the regulators. The EA persistently claim any issues surrounding earthquakes are the responsibility of the North Sea Transition Authority (previously named the Oil and Gas Authority). However, any damage caused by earthquakes could have disastrous effects, both public health and environmental, if it causes polluted waste water to migrate into our aquifers, and any clean-up would fall within the remit of the EA. All the regulators have “Working Together Agreements” but we have not seen any evidence to show that this arrangement is working when it comes to seismicity concerns.

Please insist the EA collaborate with the North Sea Transition Authority and request HHDL produce new seismic and geological studies, preferably 3D. This will be necessary as HHDL plan to drill multiple sidetracks to all six wells that they have planning permission for.

Geological Faults
David Smythe, a geologist and Emeritus Professor of geophysics, clearly showed in the objection he submitted to the EA last year that HHDL’s maps are inaccurate and the 2D geological seismic studies that have been provided date back to before 1980.

The assurances made by HHDL’s consultant, Envireau Water, that it is “unlikely that faulting will provide a pathway for transmission of fluids between the deep, water bearing layers and shallow groundwater systems” is based on old, poor quality seismic surveys of the faults throughout the Weald. Until new studies are done, these existing faults may become pathways for groundwater contamination.

There must be proper mapping of faults and clear plans of wells and sidetracks in relation to the faults. This has been put to the EA, but they currently seem content to issue the permit based on old and incorrect data.

Please demand that the EA communicate with the North Sea Transition Authority, before any permit is granted and ensure HHDL update these outdated surveys and studies and provide new seismic surveys, detailed well schematics and up-to-date detailed contour maps and cross-sections of the areas it proposes to drill through, including the intended paths of every well and sidetrack. The EA will be responsible for cleaning up any groundwater pollution, so it is in their best interest to ensure this data is up-to-date before making their decision. Why are they not insisting on this? 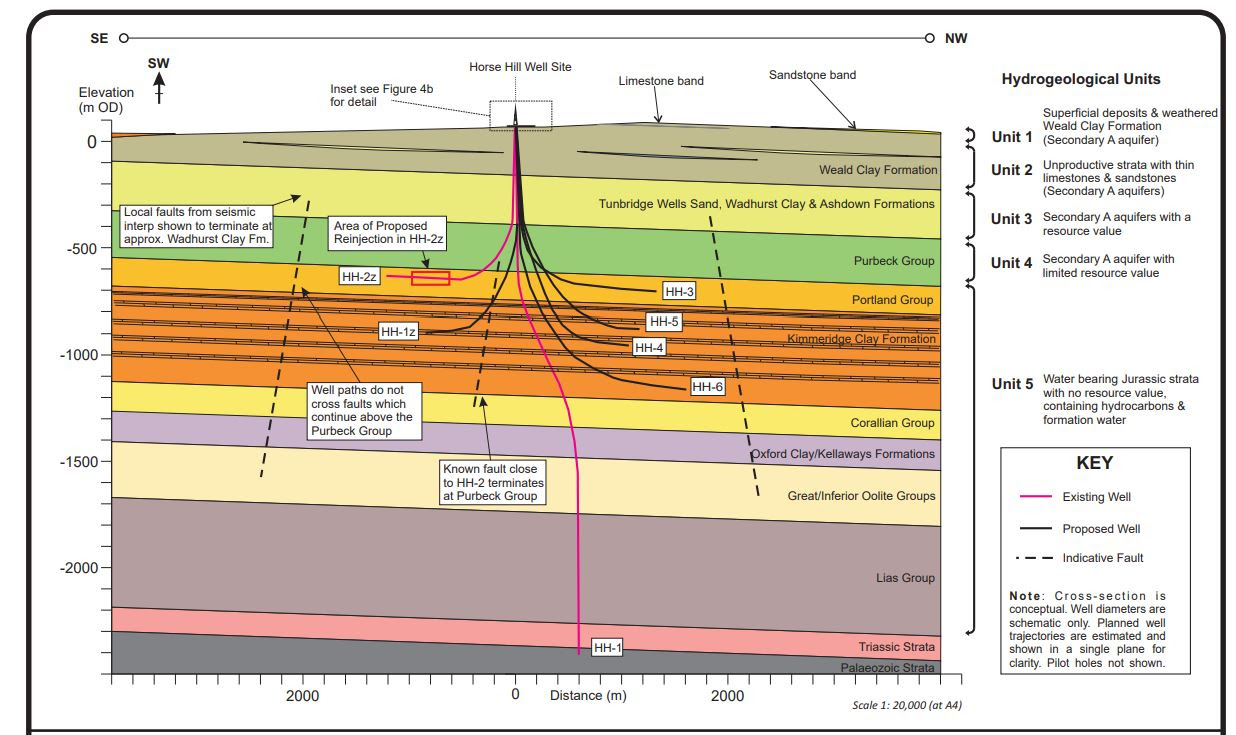 Please demand that the EA refuse the permit for reinjection wells based on the Precautionary Principle that these wells can cause earthquakes.

Methane leaks
Methane is the second most abundant anthropogenic greenhouse gas after carbon dioxide, accounting for about 20 percent of global emissions. Over a 20-year timescale, it is 86 times as potent as carbon dioxide at trapping heat in the atmosphere. It is the main component of fossil gas, and known to leak from oil sites and other coal, oil and gas infrastructure.

HHDL’s application claims that “Fugitive releases of natural gas, principally methane, are considered unlikely to be significant.” However, the Clean Air Task Force (CATF) found emissions of methane and other toxic gases coming from five separate sources at Horse Hill in October 2021.

HHDL claim they will have methane detection units on-site for this very purpose (an infrared detector unit) but they have still not purchased any monitoring equipment. They have not shown willing to monitor any emission leaks to date, even after leaks had been exposed by CATF, so how can we expect them to do so in future?

HHDL considers a 6-monthly monitoring inspection sufficient, and then to reduce it to annually. This is a serious failure to properly regulate fugitive methane emissions. The Clean Air Task Force say inspections for leaks should be monthly.

Please demand that the EA make a condition of the permit to monitor any emission leaks monthly and set a time limit for these to be rectified, and check on EA site visits.

Acidisation Vs Acid wash
There is a loophole in our regulatory system which fails to distinguish between acid wash (a weak acid solution that cleans the wellbore at low pressure) and acid well stimulation (acid used at higher pressure and often at higher concentration to get more oil out of a well). The EA has revealed in a Freedom of Information Request that it is up to the operator to monitor the amount of chemicals and pressure, and they do not cap these limits.

It is important to note that the EA are intending to set a condition of pressure limit when reinjecting waste fluids. So why don’t they cap and monitor pressures used in the “acid wash” and limit the volume and amounts of chemicals used?  HHDL persistently claim there is no fracking or acidisation taking place at their site, so why not set limits on it?

Please demand that the EA cap and limit the pressure of these “acid wash” processes to ensure that no well stimulation takes place.