The operators of the Horse Hill exploratory oil site near Gatwick have applied to vary their environmental waste permit to allow them to test the well.

The application, by Horse Hill Developments Limited (HHDL), was published by the Environment Agency yesterday. A public consultation runs until 25th June 2015.

Read the full story on the Drill or Drop website

An article* published in the International Journal of Human Rights calls for human rights impact assessments of fracking proposals.

The article, written by a team from the Human Rights Consortium, School of Advanced Study, University of London, is titled Extreme energy, ‘fracking’ and human rights: a new field for human rights impact assessments. END_OF_DOCUMENT_TOKEN_TO_BE_REPLACED

The latest press release from UK Oil & Gas Investments gives a new estimate for the volume of oil in the Upper Portland Sandstone conventional reservoir in the Horse Hill area of around 21 million barrels.

It also says that Horse Hill Developments Ltd is proceeding with applying for the relevant permissions. The press release, dated 11 May 2015, says, “Subject to approval by the relevant authorities, the Company intends to flow test this conventional sandstone zone as part of a wider test programme of the HH-1 well later in 2015. A successful test would be followed by a full technical resource assessment, and the identification of potentially recoverable resource volumes.

“Subject to these results, the Company is informed that the operator, Horse Hill Developments Ltd, intends to engage with the Oil and Gas Authority (“OGA”) and other regulators, and seek to move the PEDL137 licence into the Production Period as soon as practicable, via submission of a Field Development Plan to the OGA. The PEDL137 licence is currently in the exploration phase and expires on 30 September 2015. HHDL has applied for a one-year extension of the exploration phase to 30 September 2016.”

Two chances to speak up for the climate

Campaigners from Surrey will be at both events, please join us! 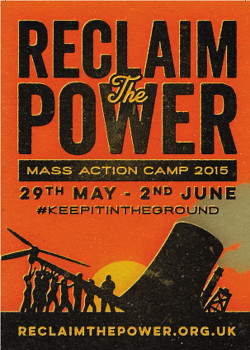 No Dash for Gas is holding an international weekend of climate action, near Didcot gas-fired power station in Oxfordshire, to take creative direct action against the fossil fuel industry and build the movement for energy democracy.

The weekend includes workshops, training, and a day of mass action against the fossil fuel industry on Monday 1 June.

More details on Reclaim the Power on www.nodashforgas.org.uk

Speak Up For The Love Of…
Westminster, London, 17 June

The Climate Coalition is coordinating a mass lobby of parliament on 17 June. The idea is that 10,000 people will meet with our MPs in the streets around Parliament, all at the same time, and urge them to protect all the things we love that are threatened by climate change.

The event will have a festival feel, with music, entertainers and art installations and aims to engage a wide cross section of people through the Coalition’s 100 member organisations.

General election result: what does it mean for fracking?

Anti-fracking campaigners are dismayed at the re-election of the Conservative Government – and the reappointment of George Osborne to his old job as Chancellor of the Exchequer (with the additional role of First Secretary of State).

The Conservative’s election manifesto said, “We will continue to support the safe development of shale gas, and ensure that local communities share the proceeds through generous community benefit packages.”

And a letter George Osborne sent to the Cabinet Committee on Economic Affairs last September shows how keen he is to fast-track shale gas drilling. The letter urged ministers to make dozens of interventions to speed the process up. Read Osborne’s letter and recommendations on the Guardian website.

Campaigners have expressed qualified relief that the post of Energy and Climate Minister went to Amber Rudd. She is at least convinced of the threat of human-made climate change, unlike some of the senior Tories.

But the Global Warming Policy Forum website says that Ms Rudd is in favour of fracking and quotes here as saying, “I think fracking is a positive thing to have in the UK, as long as we can do it extremely safely and reassure communities that that’s the case, and I think we can.”

Campaigners have a job on our hands persuading Ms Rudd that shale gas is a red herring – we need to focus all our efforts on reducing energy demand and providing people with locally-owned, sustainable energy harnessed from the sun, sea and wind.

Not all MPs share Osborne’s and Rudd’s acceptance of fracking and many voted for a fracking moratorium earlier this year. Read this summary by Ruth Hayhurst of which of these MPs kept and which lost their seats

Last month an announcement by UKOG – the company which has drilled at Horse Hill near Horley – that there could be up to 100 billion barrels of oil under the Weald Basin caused a media frenzy.

See the last two posts on this blog for some examples of starry-eyed reports which portrayed Horley as the new Dallas.

Less widely reported was the follow-up statement a week later that UKOG actually didn’t know how much oil there was in the 55 square miles it is licensed to explore – let alone the wider Weald basin (estimated approx. 1,100 square miles).

In a ‘Clarification’ statement issued on 15 April, UKOG backtracked admitted that: “The OIP [oil in place] hydrocarbon volumes estimated should not be considered as either contingent or prospective resources or reserves.”

And it said: “The Company has not undertaken work outside of its licence areas sufficient to comment on the possible OIP in either the approximate 1,100 square miles or the whole of the Weald Basin.”

Friends of the Earth South East campaigner Brenda Pollack said: “UKOG has backtracked on the wild claims it made and admitted that it has no idea how much oil is under the Sussex Weald.

“This is yet another example of the potential for shale oil and gas being over-hyped by an industry desperate to start pumping profits with little concern for residents or the climate.”

Drill or Drop website: UK Oil & Gas clarification – “we don’t know how much oil is in the Weald”