Tight Oil and the Weald

The flow testing that has just finished at Horse Hill has drawn attention to the potential for large-scale unconventional oil drilling in South East England.

While some were slow to understand the significance of the Horse Hill tests, campaigners have tried to open local people’s eyes to what they could lead to. This blog post is based mainly on information from campaign group Frack Off – see links at the end of this post.

This two-minute video contains clips from several interviews with Stephen Sanderson, Chairman of both Horse Hill Developments Ltd and its largest stakeholder, UK Oil and Gas Ltd (UKOG), about oil prospects in the Weald (the area between the North and the South Downs, including large parts of Sussex and Surrey and part of Kent).

END_OF_DOCUMENT_TOKEN_TO_BE_REPLACED

Proponents of the oil drilling at Horse Hill frequently try to reassure locals but explaining that it’s “not fracking”.

The Infrastructure Act 2015 introduced a new definition of ‘hydraulic fracturing’. Now an operation will only be defined as fracking if:

This means that companies can now undertake low-volume fracking without needing to apply for a fracking licence.

END_OF_DOCUMENT_TOKEN_TO_BE_REPLACED 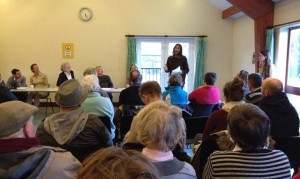 END_OF_DOCUMENT_TOKEN_TO_BE_REPLACED

UKOG plans to “move full speed ahead” at Horse Hill

They claim to have found oil flowing at a rate of 900 barrels per day from the Upper Kimmeridge layer and say that “the planned use of horizontal appraisal and development wells may further significantly enhance production flow rates“.

Local residents will oppose the planning application as they are concerned about the potential damage to air, water and the environment, the negative effect on property values, and the potential massive increase in tanker movements.

In the Evening Standard recently, UKOG Chairman Stephen Sanderson (who is also chairman of HHDL) was quoted complaining that drilling permissions that take days in Texas can take a couple of years here. Read the interview here

One local investor commented, “If he was really interested in the long-term energy security of the UK, a couple of years delay would be no problem. The fact that Mr Sanderson is bending the government’s ear to try and achieve Texas-style regulations is pretty convincing evidence that what we have here is a Ponzi scheme, and if he doesn’t get to drill quickly the whole thing will have collapsed.”