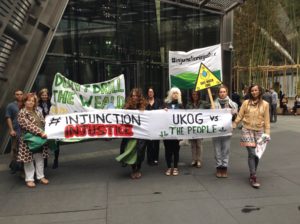 The appeal was launched this morning as UKOG, a company listed on the “Alternative Investment Market”, held its Annual General Meeting in London.

END_OF_DOCUMENT_TOKEN_TO_BE_REPLACED 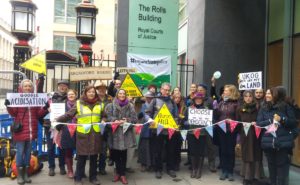 Six local residents from oil exploration sites across Surrey and Sussex have launched a crowdfunder appeal to pay for the legal costs of fighting an injunction being pursed by UK Oil and Gas Ltd.

UK Oil and Gas Ltd (UKOG, and its family of companies) has applied to the High Court for an injunction that could severely curtail local people’s ability to campaign against their plans to drill for oil and gas near their homes. UKOG has a site at Horse Hill in Surrey as well as an interest in Leith Hill site.

The six residents say, “This injunction could stop the right to peaceful protest and prevent us from raising awareness of the new risky methods of unconventional oil and gas drilling and the industrialisation of our beautiful countryside.

“We need your support to raise funds for our legal costs.”