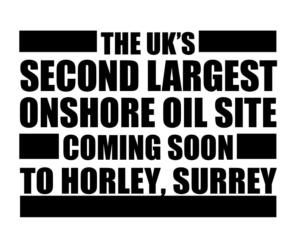 The application for a huge expansion of oil drilling over 25 years at the Horse Hill site near Horley, comes up before Surrey County Council’s planning meeting next Wednesday (September 11th).

Demonstrators from local campaign groups and Extinction Rebellion will be present for a peaceful gathering from 9am outside the meeting, which is at County Hall in Kingston.

The controversial application is for five new wells (including one for water reinjection, which is implicated in causing earthquakes elsewhere) and commercial oil production for 25 years. The operator, Horse Hill Developments Ltd, has yet to start drilling a well it already has permission for.

The site is in the Green Belt, near to ancient woodland and on a busy road in a rural area. If granted it would be the second biggest oil production site in the country, and could open the gates for further expansion. It is recommended for approval with 31 conditions. Read the Planning Officers’ report here.

Climate emergency: “It’s time we need to wake up”

Surrey County Council recently agreed a Climate Emergency Declaration with the aim of going carbon neutral by 2050 – a period that would now be dominated by large scale oil production at Horse Hill, with its associated carbon and methane emissions.

Surrey County Council is also part of the newly launched Surrey Climate Coalition. At the launch event in June, eminent Professor of Climate Science, Chris Rapley said “We are going to have to abolish fossil fuels” and spoke of generational justice and the need to avoid leaving a badly damaged planet for our children, our grandchildren and for all other species. Cllr Mike Goodman, Surrey’s Cabinet Member for Environment and Waste, said, “It’s time we need to wake up. It’s time for change. Residents are asking us to do it.”

The site has also been blamed for causing over 30 earthquakes, including one today, in the Newdigate area. While some scientists have said drilling has not caused the quakes, local residents and scientists at Edinburgh University fear that activity at the site, including pressure testing, triggered the series of quakes.