New briefing: Why we don’t need more onshore oil in the UK 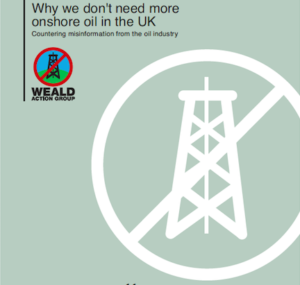 The Weald Action Group has published a briefing Why we don’t need more onshore oil in the UK, which refutes claims made by the onshore oil industry that their developments are needed to maintain energy security, that UK oil has a lower carbon footprint than imported oil, that they provide local jobs and that they are needed for plastic production.

Professor Paul Ekins, Professor of Resources and Environmental Policy at University College London, says: “This excellent report shows that new onshore oil wells in the UK are economically unnecessary as well as being environmentally at odds with the government’s climate rhetoric.”

Among the key findings are:

The briefing also highlights out-of-date policies which underpin the way planning decisions about onshore oil are made and calls for an urgent review. It asks the Committee on Climate Change to review the role of oil in the transition to Net Zero Carbon and provide new advice to Government based on current evidence and science.

“We need urgent change”, says Ann Stewart of the Weald Action Group. “Decision-makers are under pressure from oil companies wanting to expand operations across the South of England. They are out of step with the times and the science. The environmental costs are too high and the oil their sites might produce is not needed”.

Kirsty Clough of Weald Action Group says, “The briefing calls out misinformation presented by the oil industry. We hope it will help planners need to realise this and start asking more questions, rather than taking oil companies’ claims at face value when they are presented in application documents.”