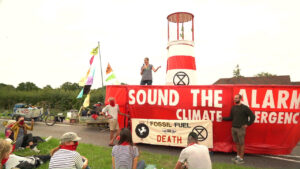 The environmental organisation Friends of the Earth and the Secretary of State for Housing, Communities and Local Government have been granted permission to participate in a local campaigners’ legal challenge over oil production at Horse Hill, near Gatwick in Surrey.

Campaigner Sarah Finch is bringing a Judicial Review of Surrey County Council’s decision to grant an onshore oil company planning permission for four new oil wells and 20 years of oil production. Friends of the Earth had applied to make a legal intervention to support the challenge; the Secretary of State applied to be joined in order to oppose the challenge.

Sarah argues that the Council failed to consider the direct and indirect greenhouse gas emissions of the project, and the government’s Net Zero target for carbon emissions when deciding to grant planning permission. The combustion of the oil produced could produce more than 10 million tonnes of carbon dioxide equivalent over a 20-year period.

“The fact that a leading environmental NGO is intervening in this judicial review indicates the importance and impact of this case. It addresses national policy as well as local decision-making and Friends of the Earth have valuable expertise in the issues it raises. I am extremely pleased that they have got involved as they have a strong record of making positive legal interventions.

“The case is all about Surrey County Council’s failure to consider the full climate impacts of the Horse Hill oil development. I believe we have strong arguments and look forward to putting those arguments to the judge.”

“We are intervening in these proceedings because there is a vitally important issue at stake: that the full climate impacts of fossil fuel projects must be environmentally assessed. If this doesn’t happen, then how are we going to tackle the climate crisis? We believe that both common sense and the law say that carbon emissions from the actual use of the oil from the Horse Hill wells cannot be left out of the equation when deciding whether to grant planning permission. Yet that is what happened here.

“Friends of the Earth believes this decision by Surrey County Council is unlawful. We are arguing that it breaches UK environmental law, and does not show proper regard to the Government’s Net Zero Carbon emissions target, or the Council’s own declaration of a climate emergency. We are pleased to stand alongside Sarah Finch and the Weald Action Group in opposing this environmentally-damaging development.”

“Our client believes that Surrey County Council did not take account of the full environmental impact of this proposed development when it made its decision to give the go-ahead.

“Since the Court of Appeal ruled that policy approval for Heathrow airport expansion was unlawful, it has been very clear that there is a legal imperative for the UK planning system to ensure that climate change impacts are properly considered at all levels. In this case, which greenlights fossil fuel extraction, it is evident that this must include consideration of the Net Zero Target.”

Sarah is supported by the Weald Action Group. The costs of the legal action have been raised by crowdfunding: https://chuffed.org/project/support-surrey-oil-legal-challenge and fundraising initiatives include an online art sale: artatwag.artweb.com