Campaigners celebrate as oil companies walk away from Leith Hill

Press release from A Voice for Leith Hill 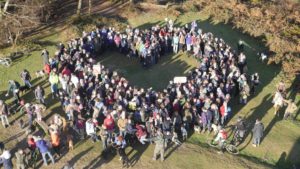 Campaigners are celebrating as a cohort of onshore oil firms have been forced to walk away from the controversial proposed oil drilling site at Leith Hill in Surrey.

The consortium of UK Oil & Gas Plc (UKOG), Angus Energy and Egdon Resources Ltd has decided to relinquish the licence after concluding that “the required long-reach/shallow target-depth wells are neither technically viable or economically feasible”.

Europa Oil & Gas, who previously held the licence, withdrew in September 2018 when the then Environment Secretary, Michael Gove MP, announced that the Forestry Commission would not renew their lease to the site because of the potential impact on nearby ancient woodland.

UKOG had been looking for sites to drill from outside the Surrey Hills Area of Outstanding Natural Beauty, which meant drilling at least 3km to access the oil.

Julian Everett of A Voice for Leith Hill said: “It was obvious from the outset to anyone with even a passing familiarity of the area that this proposal always had zero chance of success. Once you add in the wider implications of fossil fuel divestment and climate breakdown, it beggars belief that this was ever considered viable.

“If this study had been conducted in 2008 then a massive amount of time and money would have been saved that was rightly spent on the protection of this beautiful place from indefensible speculative greed. However we would still like to thank Europa and UKOG: for all the wonderful community bonds and deep friendships with amazing people locally, nationally and as far away as Bentley in Australia which have been forged during the campaigning of the last ten years. It leaves a legacy of renewed community belief, strength and history which would not have existed otherwise.“

Pat Smith from Pixham, who recently did a 100-mile sponsored walk to raise funds for a legal challenge to oil drilling at Horse HIll, said, “It’s hard to express how wonderful this news is.  On my 100 mile walk I stopped at the site of the original planning application and the threat hung heavy over this beautiful woodland. Finally, we can relax:  Leith Hill is safe.  But the threat remains across the Weald. Oil is a dinosaur.  We must move on.”

The announcement is a landmark for the UK onshore oil industry. As fossil fuel use has peaked, renewable energy is ever cheaper and the industry is looking to toxic petrochemicals and plastics as the last area of lucrative growth, it is becoming harder for companies to justify their activities with unsubstantiated claims about the ‘need’ for onshore oil.

“This is excellent news,” said Jacquetta Fewster of A Voice for Leith Hill. “UKOG should now join the fight against climate change, by focusing on renewable energy, instead of oil and gas.  To have a chance of avoiding runaway climate change, fossil fuels must stay in the ground, wherever they are. It’s lots of clean, green energy we need.”