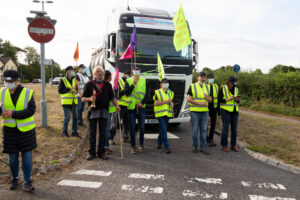 The slow walk saw around 20 Covid-19 masked activists gather near the junction of Horse Hill and Reigate Road and proceed at a snail’s pace in front of the tanker to protest the continued expansion of fossil fuel development in the midst of the climate emergency.

This is the second time in two months that protesters have used slow walking to highlight continued oil extraction at the Horse Hill site, which is two miles from Horley town centre and close to Gatwick airport.  Stewards were on hand to minimise delays to other drivers.

Protestors gathered from around the South East to join local Surrey activists to take part in the slow walk.

A protester from Brighton who wished to remain anonymous, said: “I feel I have to take action now. The climate is breaking down as we speak. Unless we urgently reduce our dependence on fossil fuels there is going to be global human suffering on a scale we have never seen before.

“New exploitation of oil, like this, taking place on our doorstep at Horse Hill, is sealing us into a terrifying future.

“The UK government and Surrey County Council have failed to act to prevent new oil development, despite acknowledging the emergency. This protest is not fun. It is scary, but I feel I have a moral duty to do what I can for the sake of my children and future generations.”

She added: “This is a small peaceful protest and we are taking what measures we can to keep everyone around us safe by maintaining social distancing as far as possible and wearing face masks.” 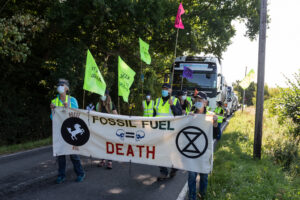 Ben, aged 37 from Sussex said: “We are at a point in time where we are on a precipice of climate break-down and the human race must take the right steps to prevent this.

“This can only be avoided if we invest in renewable energy which is becoming cheaper and easier to harness.

“The fact that the government is not doing all it can to prevent mass extinction, and continues to invest in the use of fossil fuels, is criminal. For this reason I have come to protest by slow walking the oil industry lorries entering the site.”