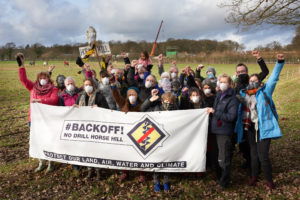 Surrey residents gathered next to the Horse Hill oil drilling site today to protest against the impacts of extending drilling for 25 years.

Wearing air pollution masks, they called on Surrey County Council to turn down unpopular plans by Horse Hill Developments Ltd to move into a 20-year production phase using seven wells on an expanded site. This would make Horse Hill – in rural Surrey near Hookwood – into the UK’s second largest onshore production oilfield.

Local resident Lisa Scott said: “It’s a drop in the ocean of what the UK use – so it’s trashing our countryside for just a few days of oil supply. I’m concerned about the use of acid to get at the oil, and the fact they haven’t told us what chemicals will be released, particularly when they’re used together potentially turning into a toxic cocktail of pollutants.”

Green Councillor Hal Brown said: “We don’t need this oil – we should be investing in renewables – and there’s no reason for this industrial drilling site in our beautiful countryside.  Reigate and Banstead Council just approved a motion which recognises the urgency of addressing climate change and there’s a groundswell of activity now behind cutting our dependence on fossil fuels. Local residents have strong views and I encourage them all to send them to Surrey County Council, who will decide on these plans.”

The impacts of the development include: