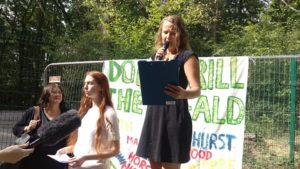 Six women from Surrey and Sussex fighting against an interim injunction application by UK Oil and Gas have vowed to fight on after a High Court judge approved it in part.

But they welcomed the Judge rejecting a number of the oil company’s restrictions.  The Judge rejected UKOG’s inclusion of their offices in Guildford as part of the injunction.  He accepted Friends of the Earth’s case and disallowed a blanket ban on publicising and promoting protest activities.  The Judge also removed some of the most restrictive clauses – like the attempt to stop monitoring what goes on at the sites.

The Judgement does however ban some protest activities which affect UKOG’s commercial interests at Horse Hill in Surrey and Broadford Bridge in West Sussex, which have been prioritised over the communities’ legitimate opposition and concerns about the adverse environmental impact of UKOG’s activities.

The Judge said that human rights were engaged in the case. But that the rights to freedom of expression and freedom of assembly and association were limited by the commercial interests of the oil company.

A statement on behalf of the defendants from the Weald Action Group, said: “It was worth fighting this draconian injunction. If we hadn’t done so when it first appeared in March, UK Oil and Gas might have succeeded in its attempt to ban lawful protest in an injunction which then covered four sites at its Headquarters and Markwells Wood. The Judge has drawn an important line in the sand on some issues, like the right to publicise and support protests and the right to monitor what goes on at the sites. He also limited UKOG’s attempt to curtail free speech by rejecting UKOG’s claim to restrict communications with the company and its supply chain.  UKOG also abandoned their attempt to  ban direct action as  unlawful.

“UKOG have ended up with an injunction at two sites which restricts significantly less than they sought. This is a partial success. But the injunction is still against persons unknown – which means everyone potentially. The injunction as it stands leaves considerable uncertainty as to what is and isn’t allowed and that is one of the things that are seriously wrong with it. It is unclear and complex and will continue to deter participation in entirely lawful and peaceful campaigning .

“Communities across the South East are rightly fearful of the threat posed by these companies to their environment and people will find it very confusing to work out what they can and can’t do under the terms of this injunction.

“We’re going to fight on. Oil companies cannot be allowed to set the legal framework for protest in this way. Dissent is not a crime and the penalties for breaching an injunction are severe.  We do not believe that powerful private companies  should be able to use the law to silence and intimidate campaigners concerned about the dangers and damage to the environment and our  communities.”

The defendants are considering applying to appeal against the ruling, which is part of a trend of court decisions targeted at silencing the growing dissent against fracking and other forms of onshore oil and gas exploration.

Sites across the South East are being developed by UKOG as part of their aim to get “back to back wells in an industrial production”.  This has prompted concerns about the contribution of onshore oil to catastrophic climate change, impacts on drinking water and air pollution, and HGV and other heavy traffic movements on narrow country lanes. The Weald Action Group supports local communities facing threats from this expansion.