UK Oil and Gas (UKOG) has been flow testing at Horse Hill since July, testing oil flow from the Portland rock formation. They say the results have ‘significantly exceeded’ their expectations, and claim that the Portland “could achieve a forecast sustainable initial 24/7 pumped rate of around 362 barrels of oil per day when full scale long-term production commences”. (see press release)

UKOG is now preparing to start testing the Kimmeridge limestone/shale formation, which is their primary target.

Throughout the period of drilling, local people and campaigners have been monitoring activities and campaigning for an end to the drilling.

Overnight on 10-11 September, security guards evicted campaigners from part of their camp near the drill site. This was a private eviction and while police were present, no arrests were made.

Confusion over extent of site

Campaigners say that UK Oil & Gas plc (UKOG) is claiming a right to the road verge, in order to prevent campaigners camping there. The Title document for the land leased to Magellan Petroleum clearly shows the outline of the site (outlined in blue on the map on page 4 and reproduced below), which does not include the road verge. 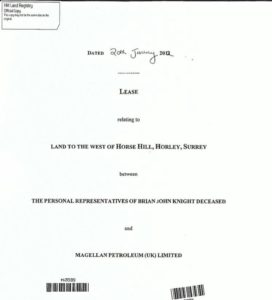 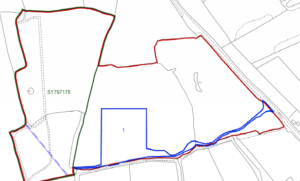