Great support for defendants in injunction case at High Court 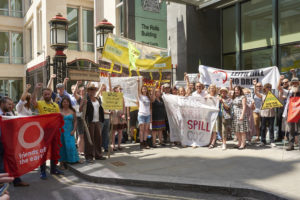 Show of support for the defendants at the High Court. Photo by James Knapp

Campaigners from across the South East gathered at the High Court in London at lunchtime today in a protest against a “draconian injunction” application by oil company, UK Oil and Gas.

Six women from Surrey and Sussex are opposing the application for an interim injunction which aims to stop certain forms of protest at UKOG sites. They say their right to peaceful protest will be stifled by the injunction, which is in breach of their human rights. UKOG is currently presenting its case, and will be followed by Stephanie Harrison QC for the defendants. The case is due to finish on Thursday morning.

The campaigners were joined by Green Party co-leader Jonathan Bartley and deputy leader Amelia Womack, supporting the right to peaceful protest. Jonathan Bartley said: “The right to peaceful protest is under threat. This draconian application is part of a nationwide rollout of injunctions which seeks to stamp out peaceful dissent wherever it is found. I stand in full solidarity with the brave activists standing up to the fossil fuel industry in court today. UK Oil and Gas’ risky methods of oil and gas exploration are a threat to our environment and jeopardise our climate targets.”

Friends of the Earth applied to intervene in the case, as it says its interests as an organisation campaigning on climate change are also affected. It was not given permission to intervene, and has applied to become defendants, subject to a costs protection agreement with UKOG.  Dave Timms, Friends of the Earth Head of Political Affairs, said: “The breadth and scope of this injunction is outrageous and we are deeply concerned about its impact on free speech and the right to protest. This isn’t so much taking a sledgehammer to crack a nut as peeling a grape with a steam roller. We support the six brave local women who have come forward as defendants to fight this case. It is about much more than stopping drilling though our countryside. We must also stop these companies from undermining our democracy.”

The case continues and is due to finish on Thursday morning.