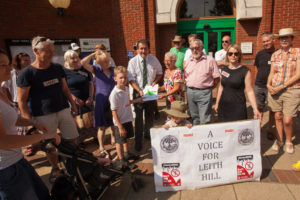 The petition was presented to local councillors in June

Members of the community group, A Voice for Leith Hill, had identified twenty iconic trees in the historic sunken lane which are threatened by oil drilling plans for Leith Hill and campaigned to have them protected.

Tree Preservation Orders are designed to protect amenity trees which are at risk. The maximum sentence for breaching a TPO is a fine of £20,000 in a Magistrates’ Court or an unlimited fine in the Crown Court.

Councillors at the meeting said the trees were part of what makes the Mole Valley countryside so beautiful and that it was important to look after them.

“We’re delighted that the Council has made this order, after a long campaign and raising over 2000 signatures on a petition”, said Sarajane Ferris, of A Voice for Leith Hill.

“These veteran trees on this historic lane can’t speak for themselves so the community has given them a voice. They face damage and disturbance from the hundreds of heavy lorry movements that the oil drilling threatens.”

A Voice for Leith Hill raised funds to commission a tree report by Furlonger Tree Services, an independent aboriculturalist, which said that currently healthy beech and oak trees “were at risk from damage and any loss would harm the character and appearance of the historic environment in the lane.”

Europa Oil and Gas is aiming to secure permission for all the conditions needed to start drilling at the site on Leith Hill. Its Traffic Management Plan, which proposes moving an oil rig up the narrow lane, as well as taking out tonnes of waste materials, is with Surrey County Council for consideration.