On the eve of the Prudential 100 cycle event (July 30th), campaign groups in Surrey are warning of serious risk to cyclists on the same roads in the coming months. 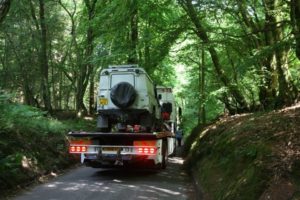 A lorry in Coldharbour Lane

Cyclists on Sunday will ride safely on closed roads. But once permission for an exploratory oil drill on the route is approved, the roads will be shared with HGVs. In the last couple of weeks a cyclist died after an accident nearby – it is feared that emergency vehicles will be slowed down from accessing this area once the oil drilling starts.

Europa Oil & Gas, in consortium with UK Oil & Gas, Union Jack Oil, Angus Energy and others, have conditional planning consent for an exploratory oil well at a site alongside Coldharbour Lane. This is a narrow, winding, tree-canopied sunken lane in the Surrey Hills Area of Outstanding Natural Beauty.

The Leith Hill Action Group, which has been campaigning against the oil drilling for several years alongside other community groups, warns that the Traffic Management Scheme will put at risk the lives of the many thousands of amateur riders who use this route throughout the year.

The Traffic Management Scheme will govern how some 1,500 HGV movements can co-exist with the normal traffic of the Lane – the safety of cyclists and horse riders is specifically highlighted.

For much of its 3-mile length, Coldharbour Lane is too narrow for a single car safely to pass a single cyclist.  It is classified as “Not suitable for HGVs”.  The vehicles to be used for this oil development are not cars but are mostly 9 feet wide and 40-50 feet long.

As required by the Planning Inspector who granted conditional permission, Europa commissioned a Safety Audit of their proposed Traffic Management Scheme.  Recommendation 3 of that document is: “Advise escort vehicle drivers that they should stop if they encounter cyclists”.  Surrey’s officers are specifically urging the county’s planning committee to ignore that recommendation because “Officers are concerned that should an HGV be made to stop every time it encountered a cyclist on Coldharbour Lane.. this could cause delay and also confusion to not only the HGV convoy but also any traffic behind the HGV convoy”.  Instead they propose that a card be issued to every HGV saying that “drivers should be aware and alert to cyclists travelling on Coldharbour Lane”.

The meeting at County Hall, Kingston at 10.30 on Wednesday 2nd August has been called specifically to discuss this Traffic Management Scheme.

In 2008 Europa Oil & Gas applied for planning permission for an exploratory well at Coldharbour on Leith Hill, in the Surrey Hills Area of Outstanding Natural Beauty.  Permission was refused by Surrey County Council in 2011.  Europa appealed and a two-week Public Inquiry in 2012 upheld the refusal.  Again Europa appealed and the High Court quashed the Inspectors decision in 2013.  The Court of Appeal upheld the lower court’s decision in 2014, and following a second Public Inquiry in 2015 conditional planning consent was granted.