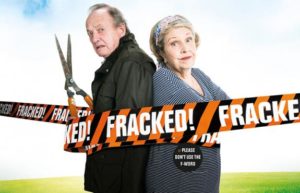 Following a sold-out run at Chichester Festival Theatre, Fracked! or Please don’t use the F-word is coming to Guildford’s Yvonne Arnaud Theatre as part of a major UK tour.

The comedy by Alistair Beaton takes us to an idyllic English village threatened by an energy company intent on drilling for shale gas.

Anne Reid plays Elizabeth, a retired academic who finds herself transformed from obedient citizen to angry protestor. James Bolam plays her husband. Bolam himself campaigned against a drilling proposal in his home village of Wisborough Green.

For other tour dates: http://www.atgtickets.com/shows/fracked/