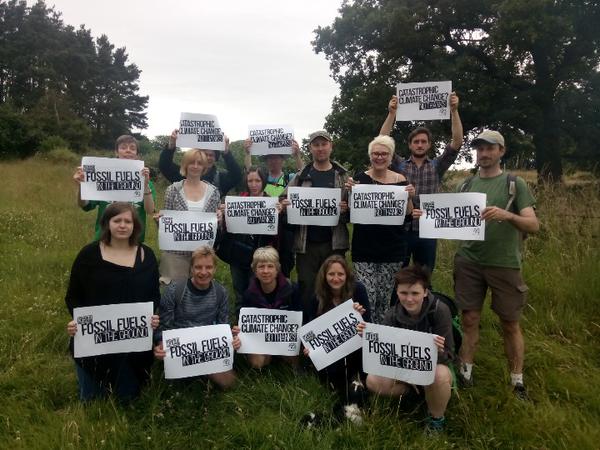 Anti-drilling campaigners at the Holmwood site

There will be a public meeting this Wednesday to discuss the protection of public water supplies and the environment at Leith Hill.

Exploratory oil drilling is planned to begin next year at Bury Hill Wood, Holmwood, a beauty spot near Leith Hill which is within both the Green Belt and the Surrey Hills Area of Outstanding Natural Beauty.

All local residents and Sutton and East Surrey Water consumers are welcome.

The application has been the subject of a long legal battle with many twists and turns. Surrey County Council refused the application from Europa Oil and Gas in 2011, a decision which was upheld by a planning inspector in 2012.

Since then we’ve seen an Appeal and two Public Inquiries; the second of these found in favour of Europa Oil and Gas, who now have planning permission for a 1,400 metre conventional oil well.

A 35 metre drilling tower with aircraft warning lights and gas flares will be installed on the site and hundreds of HGV movements will travel along Coldharbour Lane, an ancient (and narrow) sunken lane.

And this week, a senior director from Sutton and East Surrey Water warned that the drilling could potentially contaminate the water supply to up to 180,000 consumers.

And last week, we learned that UKOG has bought a 20% interest in the licence (PEDL143) that contains the Holmwood site.

UKOG had issued a press statement back in September regarding their intention and this has now been formalised by the Oil and Gas Authority.

Both the press statement and the new article refer to “tight oil” – extracting this requires acid stimulation, which is likely to mean unconventional technology.

UKOG also has interests in the adjacent Brockham and Horse Hill oil fields and has been extending its portfolio across the Weald – this map shows the extent of their assets.

Mole Valley Green Party, which has been opposing the drilling said, “If the developer finds the oil they are looking for, this could lead to a major commercial operation, causing untold damage to the environment, at a time when we should be urgently cutting back on fossil fuels and replacing them with clean, renewable energies.”